Out with the shrimp boats in South Carolina

Home » Expedition Blog » Out with the shrimp boats in South Carolina

by Autumn-Lynn Harrison
Comments are off

We begin our quest to learn more about the disappearance of Long-billed Curlews from the southeastern U.S. We will spend two days in South Carolina, followed by two in Georgia. We follow the tidal opportunities down the coast and attempt to capture and track a few of these birds.

Missed our first post in this series? Read it here: A ghost of the eastern marshes

Felicia Sanders is the Coastal Bird Biologist for South Carolina Department of Natural Resources. In the 15 years she has been on the South Carolina Coast, she’s seen the wintering population of Long-billed Curlews in South Carolina drop from 13 to only 2 or 3. For a decade, she’s hoped to generate interest in tracking them to learn about their nesting habitat and to help discover the cause of their decline. And with our partnership, the days to try are finally here! She and her staff scouted Cape Romain National Wildlife Refuge throughout the winter, watching the birds’ behavior and planning for capture. 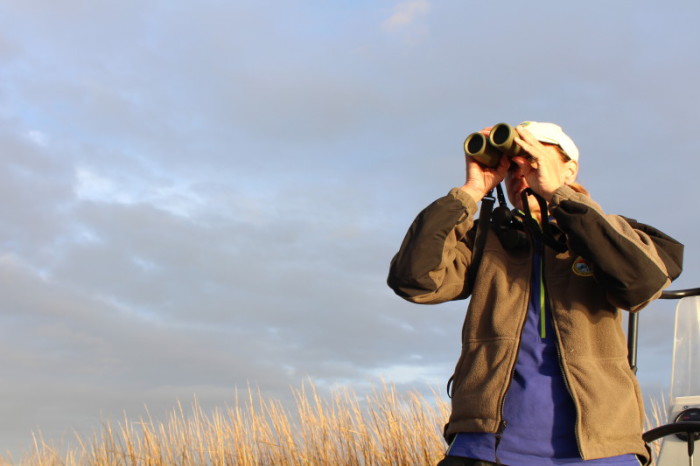 It is quite a thing to catch a curlew during the nonbreeding season. They are extremely alert, wily, and incredibly fast to flee. Except during peak high tides (the highest of the high), these birds could be spread throughout the marsh and barrier island complex of Cape Romain National Wildlife Refuge. This is an area larger than either of the cities of Charleston, Milwaukee, or Sacremento (100/250 square miles/km). So, a needle in a haystack, especially when there may only be 2 curlews in the whole place.

When extreme high tides flood all of their feeding habitat they must seek a safe place to rest. This year, there appears to be a reliable resting beach for two curlews on the leeward side of a barrier island called Lighthouse Island. There the birds wait, with hundreds of oystercatchers, until the next drop in the tide again exposes the muddy banks of the marshes. Sometimes the curlews stay for 15 minutes, sometimes for an hour or two. Sometimes they never appear at all. But this semi-predictable resting area provides our only hope for catching them.

We planned this trip to correspond with a short window of opportunity, 4 days of the highest of the winter’s high tides in South Carolina and Georgia. We are on the tide’s clock. On day 1, that means a 9:38 A.M. high tide. Out with the shrimp boats at 5:45 AM, we depart at dark on December 14, 2015 from the public boat ramp of lovely McClellanville, South Carolina. 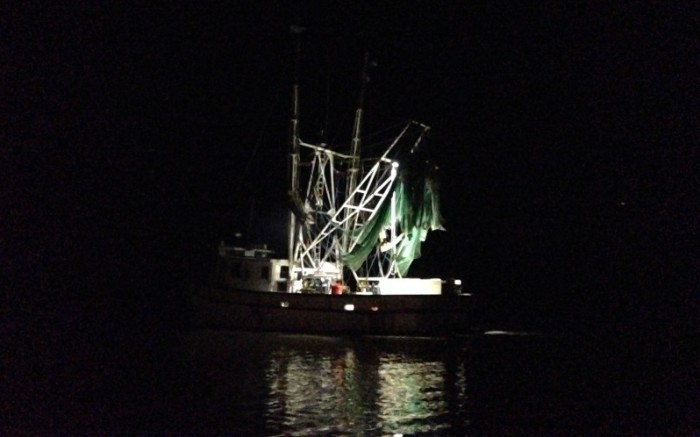 Our 45 minute boat trip takes us to Lighthouse Island, home to a pair of brick lighthouses that survived the infamous Hurricane Hugo in 1989. Felicia’s team includes wildlife biologists Janet Thibault and Mary-Catherine Martin, and Erin Weeks, science writer from South Carolina DNR. And, I’ve flown in a ringer from our Texas curlew tracking project: David Newstead, aka, the curlew-whisperer.

We haul our gear from the boats, including shovels, stakes, radios, canon nets and accessories, a scope, holding boxes for any caught birds, and banding gear.

The most precious cargo of all is a pair of exquisite hand-carved curlew decoys, donated by local carver Mr. Pat Campbell. They are to be used, he says. 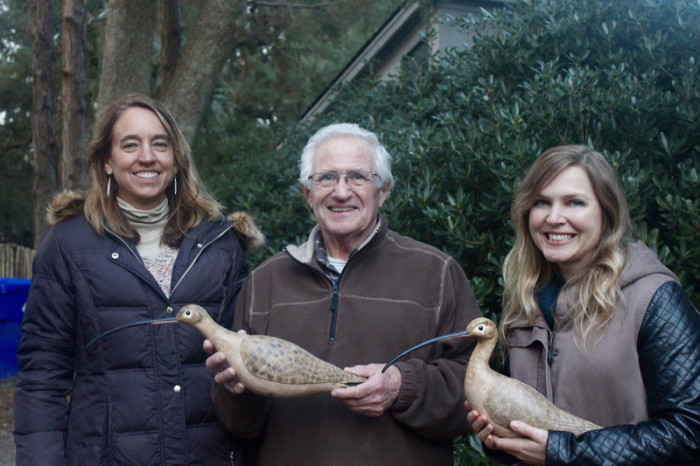 We set our nets on the leeward side of the island (more details on canon netting can be found in this post from Texas, and in upcoming posts from Georgia!), and we station ourselves strategically for maximum view. Some of us remain on the island, ready to fire the net, view through the scope, or “twinkle” the birds as needed. The rest of us board the boats to provide a couple of additional viewing angles.

We are just in time. A pair of curlews fly in to rest just as we walked out to the boats and the sun was still rising to a low rosy pink. If we had been 10 minutes later, the curlews might not have landed at all. 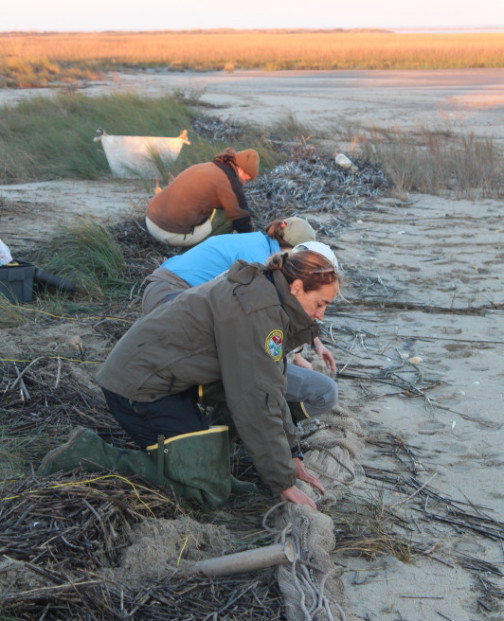 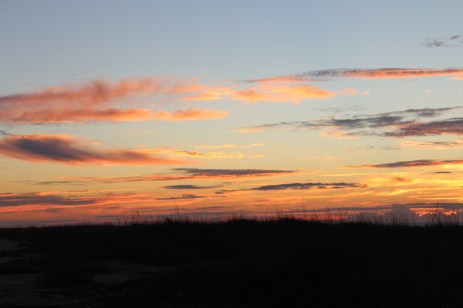 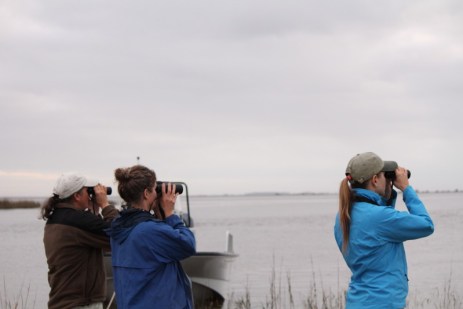 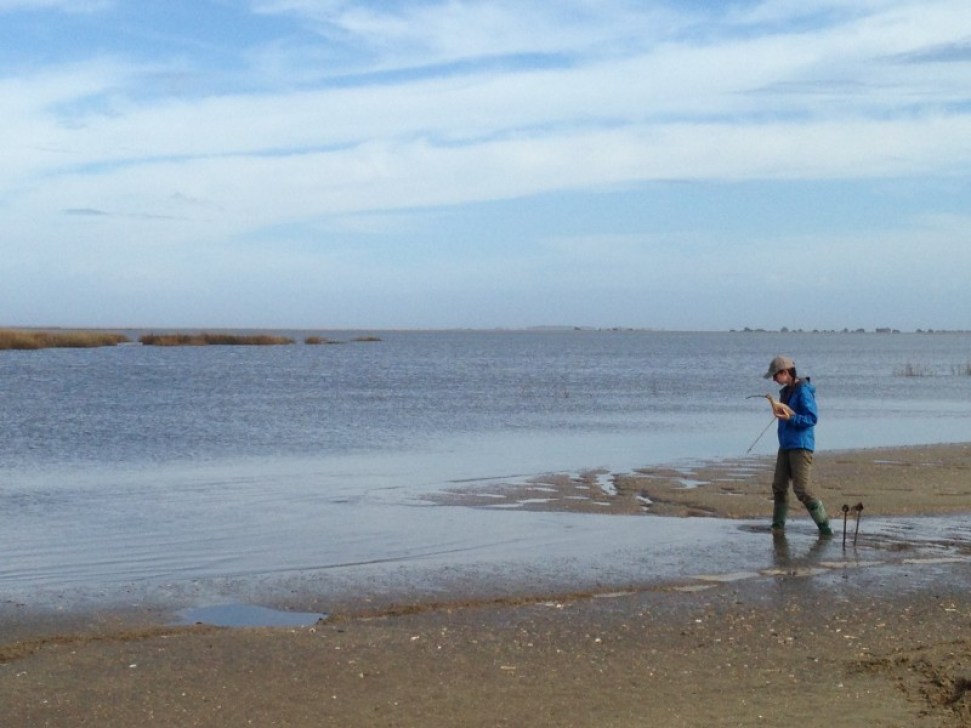 The two curlews like to mingle at the edge of a large flock of American Oystercatchers, but the curlews don’t venture as high up on the beach as the oystercatchers do. Our nets can only reach so far. We wonder if in the past, curlews flocked with each other like John James Audubon observed, rather than with other species. There is safety in numbers. 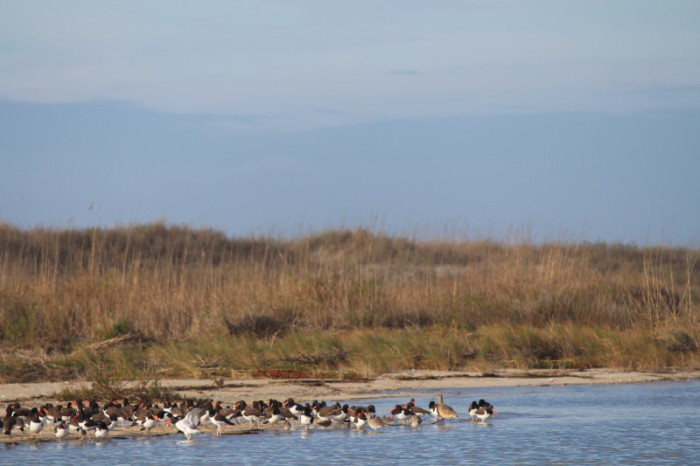 Curlew on the edge. By Erin Weeks/SC DNR

A Peregrine Falcon disturbs our flock. It’s like a nature documentary and each of us can hear the suspenseful music in our heads. Our hopes for capturing the curlews sink.

Surprisingly, the birds return and appear to be in our capture zone. We all view from our various angles, communicate with each other by radio, and wait to make sure we can safely attempt a capture. Unfortunately, on this day, the curlews are in the right spot, but the oystercatchers are too close to the firing area of the net. We risk injuring them if we fire. So, we wait longer, losing tide with every minute.

The tide falls, the birds leave, and this day, we come up empty.

Discover other exciting projects of the Smithsonian Migratory Bird Center