With their increasing use, there are a number of resources to reference for their applications. A recent book by Hobson and Wassenaar (2018) details the background of the topic, application, and analysis. Several review papers have also covered the use of stable isotopes in marine fishes (Trueman et al. 2012) and birds (Inger and Bearhop 2008).

Stable isotopes are non-radioactive forms of elements that have similar chemical properties but vary in their atomic mass due to differences in the number of neutrons. The differences in atomic mass cause separation among isotopes of the same element during geochemical and metabolic processes. This phenomenon is known as isotopic fractionation. 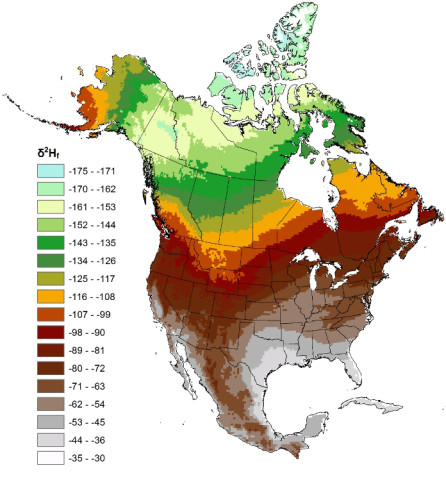 Approximately two thirds of the known elements have more than one stable isotope, but isotopes of carbon (13C), nitrogen (15N), and hydrogen (also know as Deuterium, D) are among the most useful for studying migratory connectivity. There are two reasons for this.

Each of the aforementioned isotopes offers different clues about a bird’s molt location. Some of the most informative research on migratory connectivity uses multiple stable isotopes or uses stable isotopes in combination with genetic markers. 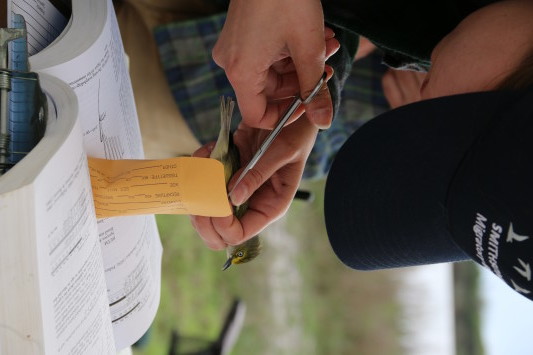 A Smithsonian Migratory Bird Center researcher collects a claw sample to use in stable isotope analysis from a migrating White-eyed Vireo. Photo by Annie Novak.

Feathers (claws, blood and muscle can also be used) are the most commonly used tissue in stable isotope investigations of migratory connectivity. Most species of migratory birds undergo a complete molt once each year between July and September on or near their breeding areas, and the isotopic signatures of foods eaten during this time become incorporated into feathers. Because isotopic signatures are mostly inert once stored in feather tissue, samples collected later on in the year provide information about the geographic origin of birds during molt.

If you have avian tissue samples, you can also consider contributing the sample metadata to the IsoBird Network which collects collects, stores, and provides access to avian samples through a global online platform. Uploading the basic sample metadata will facilitate the sample reuse in stable isotopic ecology. This could yield a broad range of studies including multi-species and large-scale projects and will help create research connections between ornithologists across the globe.

Using a variety of approaches strengthens connectivity research. Often an isotopic component would be useful but a scientist is not set up to carry out the analyses in their own lab. More labs are developing the capacity to carry out isotopic analyses of population connectivity. Search for universities, agencies, and companies near you that have stable isotope analysis laboratories.