A bill only a mother could love

Home » Expedition Blog » A bill only a mother could love

If there’s one thing I’ve learned in all the years I have been doing wildlife biology, it’s that things don’t always work out the way you want them to. Today, we were to solidify that little lesson in the minds of our team not familiar with the age-old rule in field biology.

We’re not in a laboratory or in a controlled situation. We’re working in the field with wild animals and many unknowns. Things can and will go wrong, and the trick is to roll with it and adjust.

Our plan today was to catch and attach transmitters to Marbled Godwits and Long-billed Curlews, large shorebird species with bills that make you look twice, if not three times before you realize it’s actually a bird. 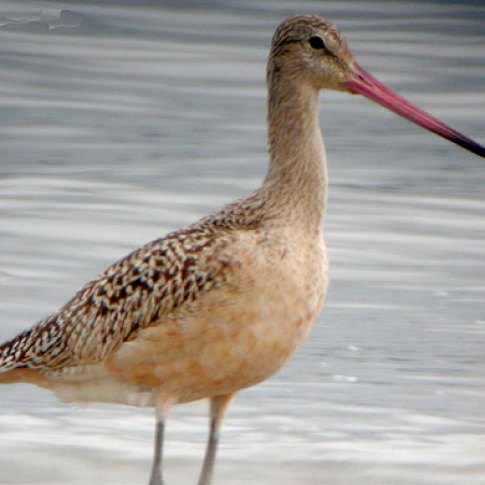 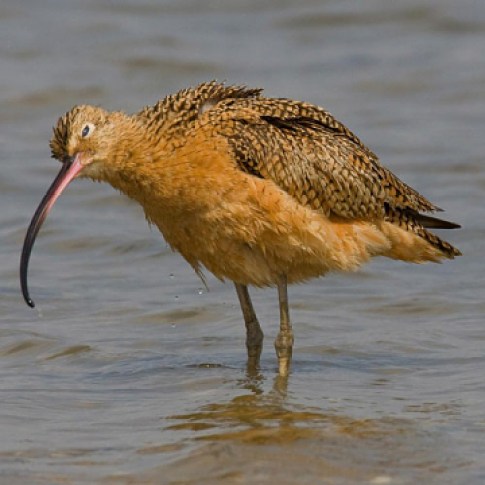 Long-billed Curlew. Credit: Gerhard Hofmann
David had been watching large numbers of both species in the city park in Corpus Christi for several weeks. Curlews and Godwits are short grass prairie specialists and although much of that native habitat had been destroyed, it turns out that grassy areas in city parks simulate prairie pretty well. David was cautiously confident that we had a good shot at catching good numbers of both species. Police had been notified that we might be using explosives within city limits.

Our group made up of our Smithsonian team (myself, Amy Scarpignato, Autumn-Lynn Harrison, Virginia Kromm), ConocoPhillips rep (Natalie Riley), professional photographer (Tim Romano) and video team (Randy and Tom from Bayou Productions) climbed into our Texas-sized caravan and headed into the big city. We were soon cruising by the “short grass prairie lawns” of the city park. No birds in sight. David was literally scratching his head.

Recent weather combined with the exceptionally high tides must have triggered these birds to move. After searching several areas we eventually came upon a flock of about 17 Marbled Godwits resting on the edge of a mudflat with some Black Skimmers just outside city limits. We were hopeful.

We placed a cannon net about 30 feet from the flock. The skimmers took off as soon as David approached with the net but the godwits stuck to their mud.

Black skimmers flying. Godwits are perched on the left and laughing gulls on the right. © Tim Romano.

Godwits, like many species of shorebirds like to save their energy and only fly if necessary. Once all was in place, David began “twinkling.” You’ve heard of herding cattle, sheep and cats? Twinkling is essentially the same thing except it refers to the act of slowly moving a flock of shorebirds into the area where a net will harmlessly fall on the birds after launching from the cannon. David is an exceptional twinkler. Imagine half horse whisperer, half ballroom dancer.

David moved into position behind the birds in almost knee high water and started moving his flock of large mesmerized shorebirds in the direction of the capture zone. I was watching from a distance day dreaming and confident that we would soon be holding these gorgeous things in our paws. Then, for no obvious reason, they flew. David bent over in frustration. Thirteen hearts of our team members hit the ground.

We regrouped and in five minutes they were back in the same spot. David twinkled them again. Five feet more and the net shot out of the cannon. The birds flew and this time they didn’t come back.

Adjust and move on. We put out two Long-billed Curlew decoys and sure enough within ten minutes a Curlew and two Willets unsuspectingly landed near the plastic dummies. David began twinkling. The bird and David became one moving in almost perfect unison…or so we thought.

David announced in his radio to get ready…3…2…1…hit it…BOOM! The net flew in a rapid explosion but fell short and the curlew flew. The plastic curlews were the only captures. We were done. Time to eat lunch and regroup.

Cannon net goes off but only the decoys are caught. © Tim Romano.

We decided to head to the beach for the rest of the afternoon where our adjustment was rewarded with the capture of a black-bellied plover and six red knots. We attached satellite transmitters on the plover—a first, and on three of the red knots.

As we released each of these remarkable birds on the Texas sand kissing the Gulf waters, I kept thinking how remarkable it is to still be able to watch each of these species fly in the wild. Given what’s happening to shorebird populations, this is a vision that might not be something future generations will witness.