HOME | who we are | current events | projects

Thanks to support from ConocoPhillips, we are testing new technologies, working with researchers and volunteers throughout North America, and discovering critical information about the migratory connectivity of bird species of conservation concern.

For this study, we are focusing on examining a range of likely projections of key climate variables – temperature, precipitation, and drought stress – that could be used to assess future effects of climate change on avian vulnerability. We will create a database for these species, including factors that affect vulnerability, such as overall breeding and wintering ranges, habitat use, life history traits, population size, and population trends. Assessments of climate change vulnerability will be done both with data from breeding locations, and then, based on our analyses of BBL connectivity data, with climate data from winter locations. This novel approach will permit an assessment of both the geographic and life cycle components of vulnerability. We will also incorporate additional metrics derived from a detailed review of life history traits and population trends. These will be the most scientifically rigorous assessments of vulnerability yet conducted and will both help prioritize conservation actions and contribute to advancing the analysis of mark-recapture data for assessing migratory connectivity.

This work is generously supported by ConocoPhillips Global Signature Program.

Peter P. Marra and Colin Studds
For migratory animals, understanding the selective processes has been impossible because our inability to follow individuals year-round and determine where breeding populations winter and where winter populations breed. Recent technological advances in stable isotope signatures, however, make it possible to determine the geographic origins of wintering birds. Because migratory birds molt on their breeding grounds, feathers collected on their wintering grounds will still have the isotopic signature of the location in which they were grown. In this study, we will construct isotopic base-maps for six species of Nearctic-Neotropical migratory birds wintering in the Caribbean basin, producing a map linking the breeding and wintering areas of each species.

Our study species are small insectivores which live in forested habitat. Each has a large breeding and wintering distribution encompassing significant continent-wide isotope variation. This will allow us to distinguish geographically separate populations and increase the likelihood of identifying migratory patterns, such as distances travelled by populations and the structure and connectivity of these populations. This study represents the most rigorous effort thus far to develop a connectivity base-map for the entire year-round range of any migratory animal. Such information will significantly improve our understanding of basic ecological and evolutionary processes, and, by determining the degree of population mixing, generate critically needed information for conservation.

Using Geolocators to Study the Migratory Connectivity of the Eastern Willet 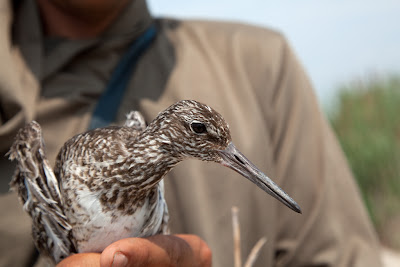 But it is difficult to pinpoint the causes of these declines because many shorebirds have migration routes that span the globe, with numerous stops along the way. To improve effectiveness of conservation projects for shorebirds, we need to understand where and when the problems are occurring so we can take action. The The New Jersey Nature Conservancy, Smithsonian Migratory Bird Center and the Biodiversity Research Institute are playing a role in the effort to identify the important places throughout the hemisphere for shorebirds by focusing on the eastern willet. This species has received little conservation attention in the past, even though it is the only shorebird in North America that breeds in salt marshes. These narrow ribbons of coastal habitat, at the interface of land and sea, play a pivotal role in marine ecosystems and in local economies. By nature salt marshes are limited in extent and are rendered even more so by the destructive actions of people and the effects of sea level rise. Salt marshes are home to vulnerable species that live nowhere else, such as the diamond-backed terrapin turtle and the eastern willet.

The site of our willet research is the Nature Conservancy’s Gandy’s Beach Preserve on the Delaware Bayshore. We are using devices called geolocators to track the migration of willets. These geolocators are showing us exactly where the willets go each winter. Prior to this project, this knowledge was only guessed at. By knowing only half of the story of where willets live, we could do only half the job of protecting willets—protecting their spring and summer salt marsh nesting habitat. Their winter destinations were virtually unknown. Now, for the first time, we are learning the other half of the story. By tracking the migration of the eastern willet, we have learned that there is strong connection between the Delaware Bay where they nest and the mangrove coastline of northern Brazil where they spend the winter. This wintering area is a critical site for not just willets, but also for other shorebirds such as red knots and whimbrels. We will use these new insights into the winter destinations of willets to help search for the reasons behind the decline in shorebird populations that winter in northern South America.

Making tangible connections between different parts of the annual cycle for migratory species allows us to precisely target conservation funding and actions toward the places in Central and South America that shorebirds rely on for winter habitat. Our work is a contribution to a larger effort pursued by dedicated people from an array of organizations across the western hemisphere. Together, we are answering key questions to improve conservation for these remarkable species.

Peter P. Marra and Michael T. Hallworth
Migratory connectivity, the degree to which individuals from the same non-breeding location migrate and breed in the same geographic location, has been difficult to quantify. The use of stable-hydrogen isotopes (deuterium) has been used on a number of migratory bird species. However, deuterium values vary with latitude but not longitude, which means that wintering birds can only be assigned breeding latitudes. In addition, deuterium values also differ with elevations, such that individuals occurring at higher elevations in the breeding season may be assigned to the wrong latitude. Therefore, techniques incorporating both indirect (isotopic) and direct (mark-recapture) methods are needed to accurately quantify the degree of migratory connectivity.

This study focuses on the Ovenbird (Seiurus aurocapilla), a ground-foraging Neotropical migrant that winters throughout the Caribbean basin and Central America. Ovenbirds are widely distributed throughout North America during the breeding season and are large enough to carry a geolocator, which will enable us to directly measure migratory connectivity and compare the accuracy of using stable-hydrogen isotopes to quantify migratory connectivity. In addition, this study will lead to a better understanding of how climatic changes or habitat alterations throughout the Caribbean could impact the Ovenbird population, allowing more informed conservation decisions to be made regarding conservation of habitats on specific islands or throughout the Caribbean.

Thomas B. Ryder, James W. Fox, and Peter P. Marra
Published 2011 in the Auk, 128 (3): 448-453.
Understanding the connectivity between breeding and nonbreeding populations of migratory birds is fundamental to our knowledge of biological phenomena such as population dynamics and dispersal, and has consequences for both conservation and management of migratory species. We combined two direct methods, mark-recapture and geolocation, to estimate the migratory connectivity of breeding and nonbreeding populations of Gray Catbirds. Data from the geolocators showed that birds breeding in the Mid-Atlantic overwinter in Cuba and southern Florida. Mark-recapture data also showed that Mid-Atlantic and Midwestern populations occupy distinct geographic localities during the nonbreeding period. Our research underscores the importance of geolocators as tools to advance out understanding of migratory connectivity, and highlight the value of U.S. Geological Survey (USGS) Bird Banding Laboratory mark-recapture data.

Recent advances in technology have made geolocation devices smaller than ever, enabling researchers to track small birds with greater accuracy than ever before. This opens new avenues of study into the connectivity between breeding and non-breeding populations of migratory species, because we are capable of tracking individual birds from one location to the next very accurately. We have ongoing geolocation projects in bobolinks, seaside sparrows, and Bicknell’s thrushes in order to assess the migratory connectivity of these populations and advance our knowledge of the life history of these birds.

HOME | who we are | current events | projects