The last time I was in a helicopter it was with a retired Army pilot and a coastal Ranger on a ghost net patrol, zipping and dipping over the steamy beaches of Australia’s Northern Territory. This time, I’m on my way to a very different type of Northern coastline—the North Slope of Alaska. 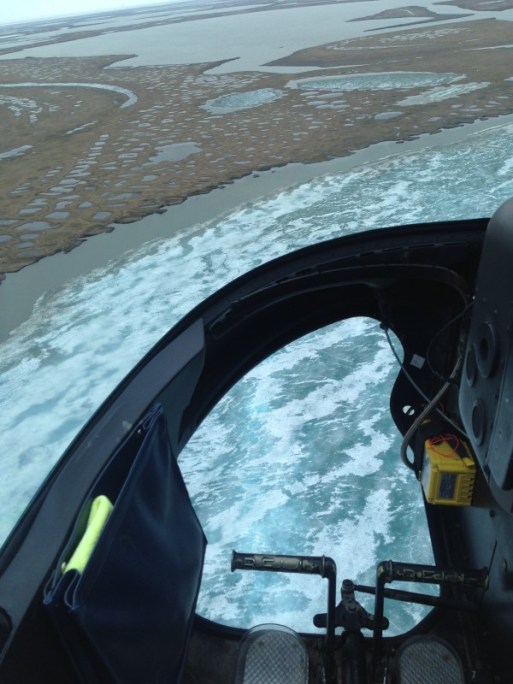 Bird with a view. Helicopter transporting us over the Alaskan Tundra. 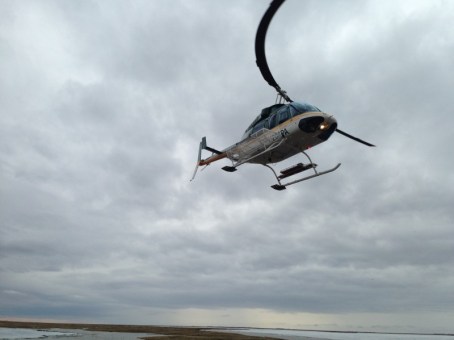 See you again in 10 days 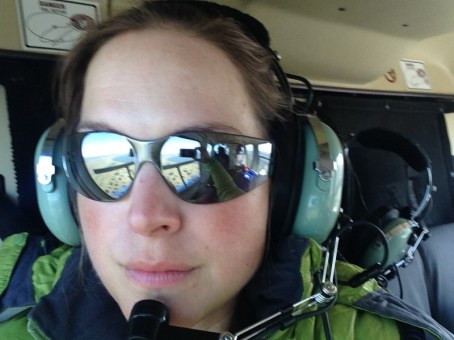 While some members and partners of the Migratory Connectivity Project are working in Colorado this summer, and others are in Alberta, I’m in the Arctic tundra with biologists from the USGS Alaska Science Center.

During the brief northern summer, the tundra teems with insects and is saturated with light. This is my first visit to the Arctic Circle and for the month I am here (June 13-July 15), I won’t see night.  North of 70 degrees latitude, the sun won’t set again until August.

The long days and rich food resources support millions of birds that migrate to the Alaskan tundra to breed. Our goal is to better understand the migratory connectivity of two of these species: Black-bellied Plovers and Pacific Loons. We hope to attach satellite transmitters to ten individuals of each species. Satellite tags allow us to track birds in near real-time, providing us with important connectivity information including migratory pathways, locations of stop-over and wintering areas, and the similarity (or dissimilarity) among individuals. 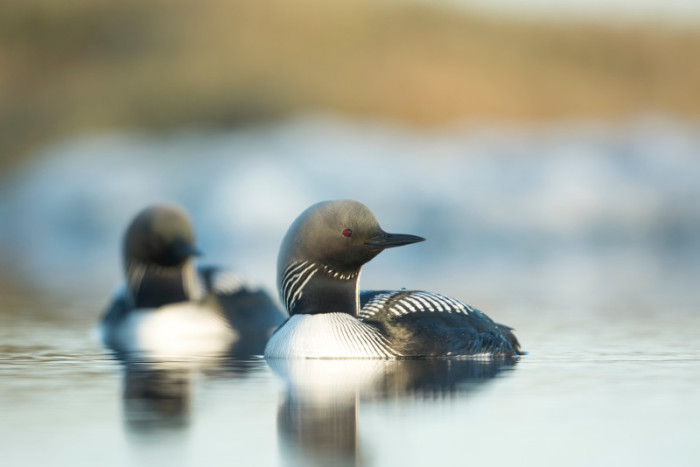 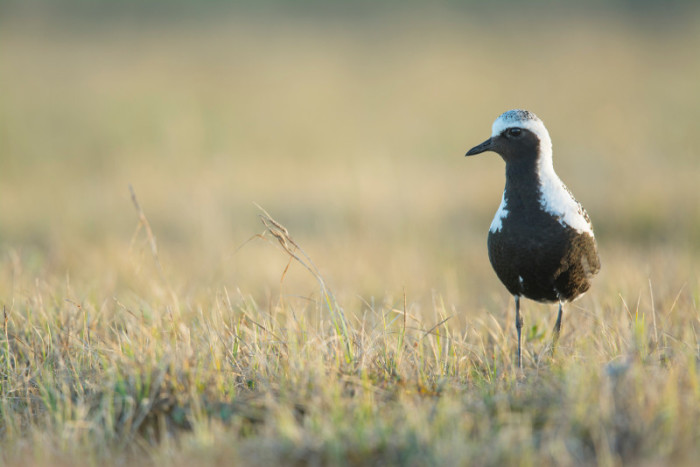 The helicopter sets down at my home for the first week of this Alaskan expedition. Traveling with me is Lee Tibbitts, Alaska shorebirds maven. We’ll soon embark on our quest to catch and tag Black-bellied Plovers, but first, we grab our gear, give the thumbs-up to our helicopter pilot, and are welcomed to a remote USGS research station perched on the bank of a channel in the Colville River Delta. If you’re wondering where that is, the geographic coordinates are kindly written on the door of the weather port, along with other useful numbers like the Coast Guard and Alaska State Troopers. 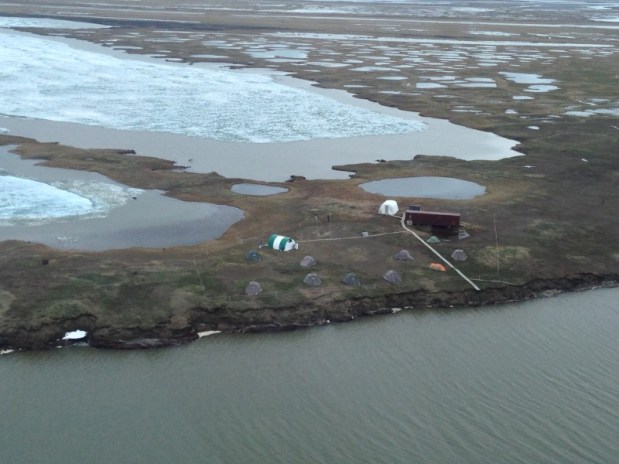 The USGS Colville River Delta Research Station from the air 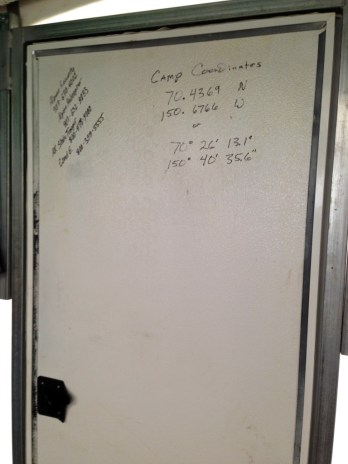 The midnight sun takes some getting used to, but the research station itself is extremely comfortable and friendly.  USGS Research Wildlife Biologist Dan Ruthrauff orients us to the station. A bear fence encloses tents, two weather ports (one for science and one for eating and gathering), and a Conex storage container that serves as both a food pantry and a gear warehouse. 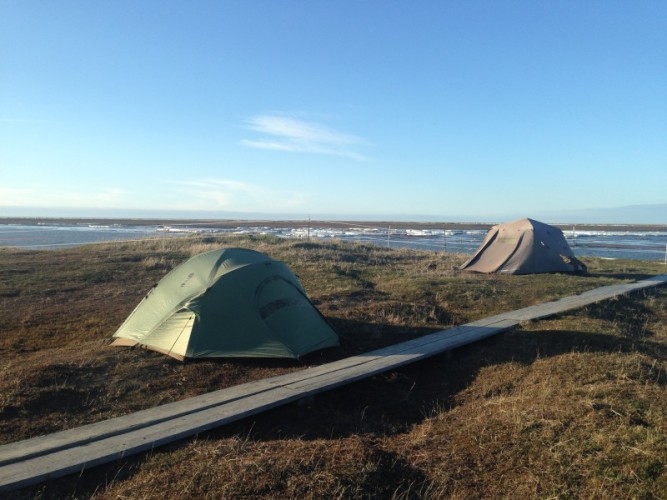 The honey bucket sits outside the bear fence, has a nice view, and is surprisingly literary. Colorful poetry adorns its plywood walls. 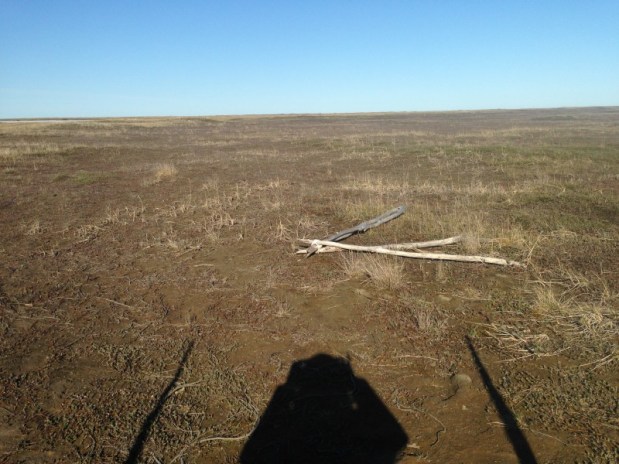 View from the honey bucket 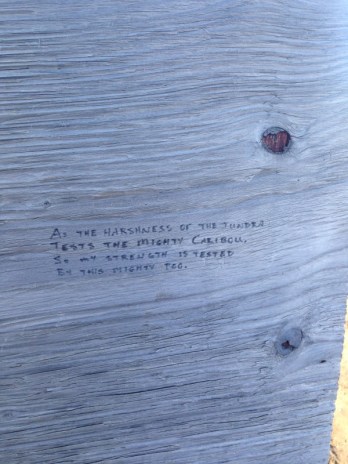 Throughout the summer, researchers and technicians, energetic interns, and affiliated graduate students will fly in and out of this valuable science outpost. Research here focuses primarily on avian herbivores (Black Brant, Snow Geese, and White-fronted Geese) and insectivores (shorebirds and landbirds). The station is supported by the USGS Changing Arctic Ecosystems Initiative which seeks to understand and predict the response of wildlife resources to changing Arctic climates.

The research here would also not be possible without the logistical support of ConocoPhillips Alaska. It’s from the ConocoPhillips Alpine Camp that all researchers and gear are transported via their helicopters and pilots to the research station. There are no roads.

Our own work over the next week will take us on exciting adventures. Check back soon for the next post in this series: How to catch a plover. 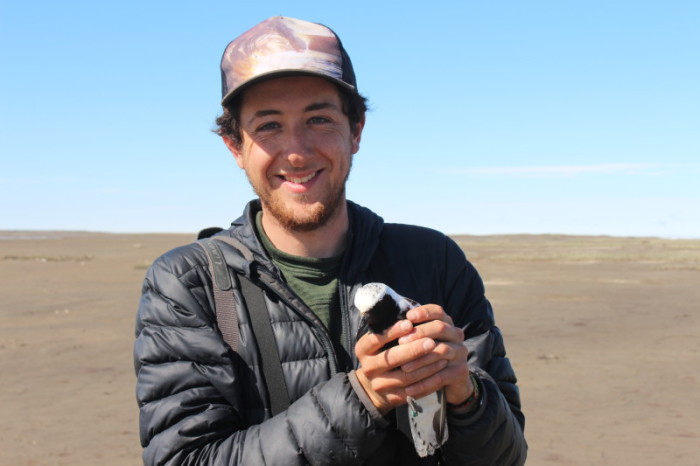 Humboldt Master’s student, Aaron Gottesman, takes a break from his Semipalmated Sandpiper work to help us catch a plover!