Birds, Bogs and the Boreal

This summer the Migratory Connectivity Project and Smithsonian Migratory Bird Center joined forces with Erin Bayne’s lab at the University of Alberta in Edmonton to deploy transmitters on multiple species in northern Alberta; rusty blackbird, olive-sided flycatcher, palm warbler, common nighthawk, and broad-winged hawk. Using various types of tracking devices we hope to understand the migratory connectivity of these species, many of which are undergoing population declines. 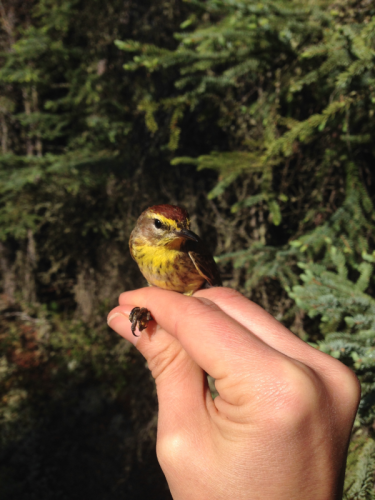 At our first site, near Fort McMurray, our main focus was to deploy 0.4 gram light-level geolocators on Palm Warblers. With light-level geolocators, we can infer latitude and longitude from light levels that are recorded and stored on the transmitter. But this means next year we will have to recapture the same birds to get the data from the geolocator.

In Alberta, palm warblers nest in bogs. One morning I was trying to stick a mist net pole into the spongy, moss-covered ground but I kept hitting something hard about 6 inches below the surface. I figured it was a rock since that’s what it would most likely be in areas where I’ve worked before. But no, I stuck my hand through the moss to investigate and about six inches down I hit something hard and cold, very cold. It was ice! Even in July, the ground underneath was frozen. 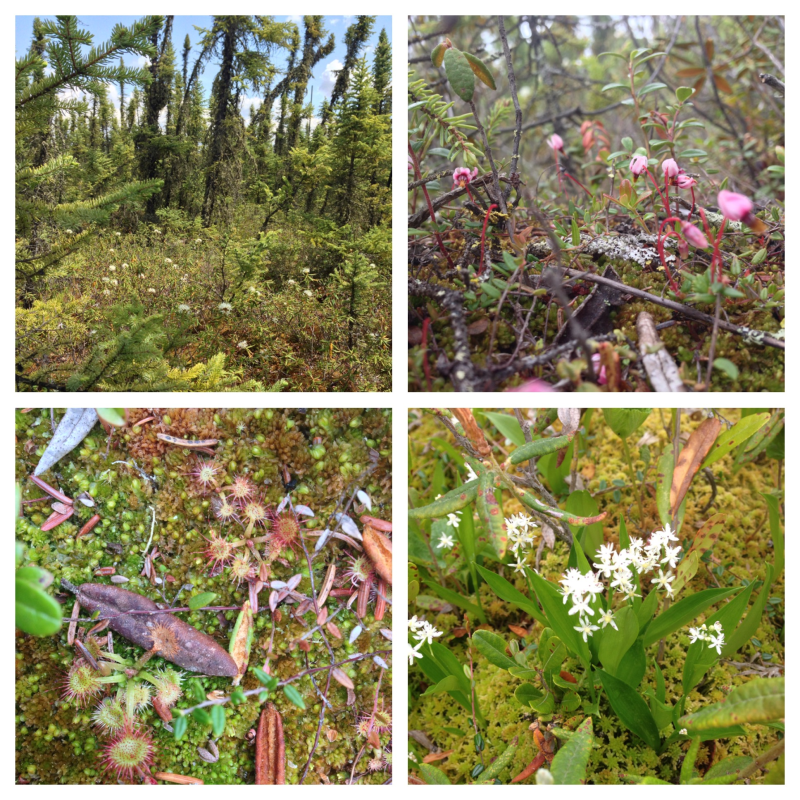 After a few days near Fort McMurray, we headed further north and shifted focus to capturing olive-sided flycatchers and common nighthawks. And when I say further north, I mean as far north as you can drive in this area of Alberta. They call it “end of the road” because literally it is the end of the road. 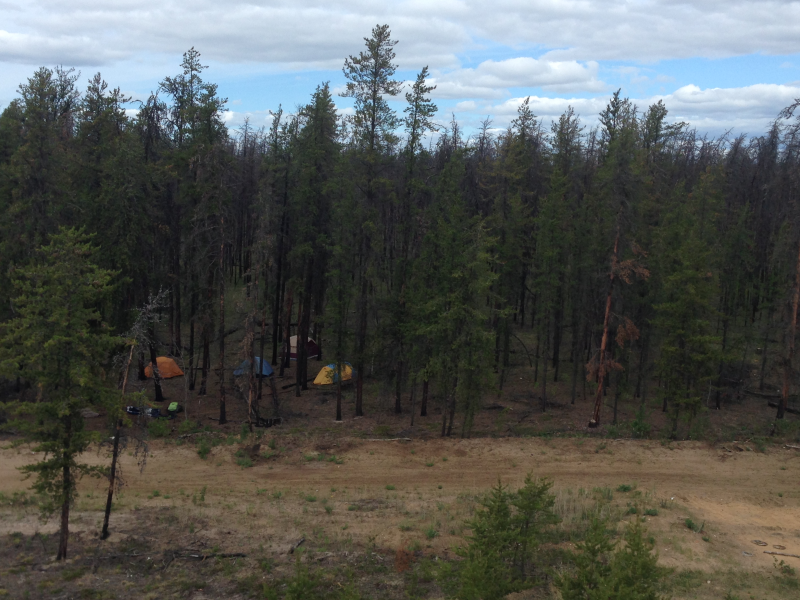 Our campsite at the “end of the road”. Photo: Amy Scarpignato 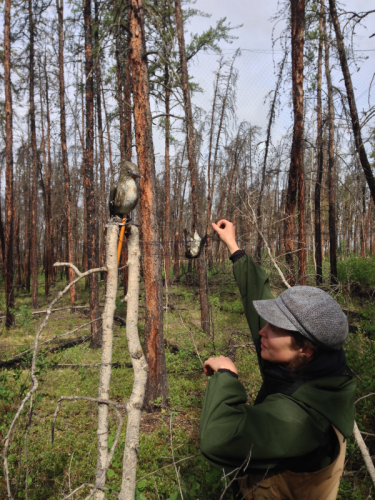 In this area, olive-sided flycatchers favor areas with tall trees mixed with open areas. Flycatchers perch high in the trees and very rarely come down low such as to the levels of our nets. Therefore we used “playbacks” (recordings of male songs) in conjunction with a decoy to lure the flycatchers into our nets.

Like the palm warbler geolocators, the 2 gram flycatcher GPS geolocators, store locations within the geolocator so we need to recapture the birds to get the data. What is different about these geolocators is that instead of using light-levels to infer locations, 8 GPS locations are recorded at previously scheduled times throughout the year. The use of GPS allows for locations with less than 10 meter accuracy whereas locations from light-level geolocators have much more error. 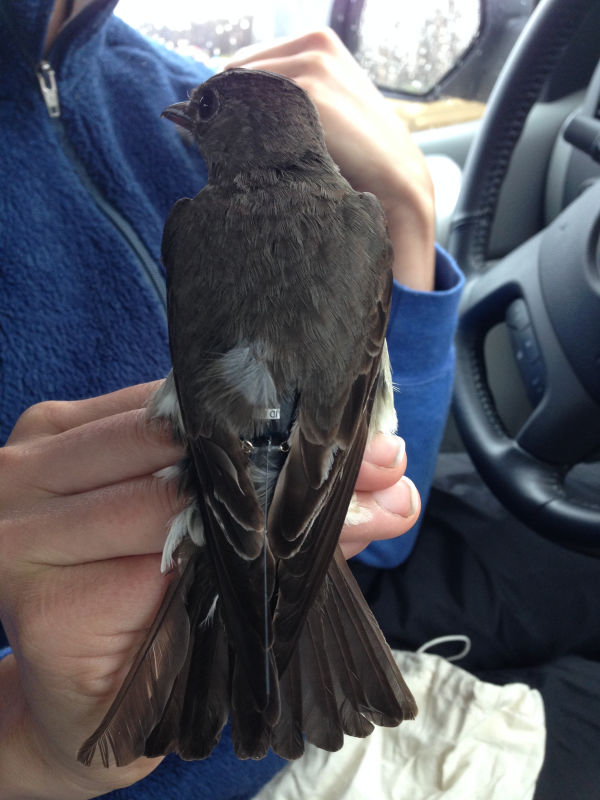 Two gram GPS geolocator attached to the olive-sided flycatcher. The transmitter is attached with a harness fit around both legs and sits low and even on the back. Photo: Hedwig Lankau

Each day after flycatcher trapping, afternoon naps and a quick dinner, we prepared to capture and deploy transmitters on common nighthawks. The nighthawk transmitters are the same 3.4 gram GPS Argos transmitters we deployed on red knots, black-bellied plovers and marbled godwits last year in Texas. As with the olive-sided flycatchers, we used both playbacks and a decoy to help capture the birds. 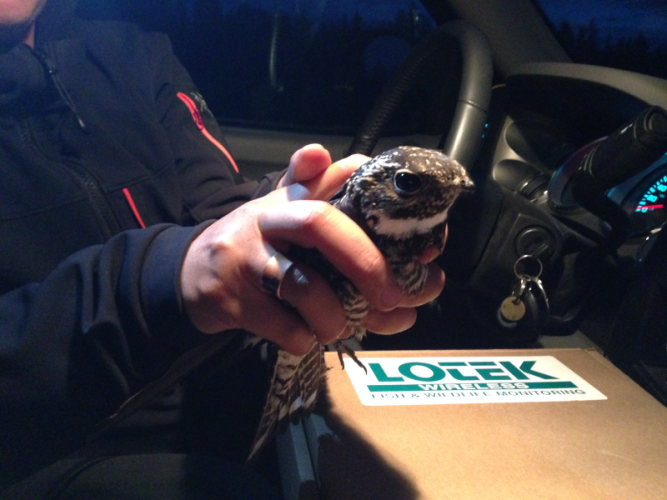 So far crews have deployed transmitters on 8 rusty blackbirds, 4 olive-sided flycatchers, 20 palm warblers, 10 common nighthawks, and 3 broad-winged hawks. Stay tuned for more blogs and updates about our summer in the boreal forest of Alberta. 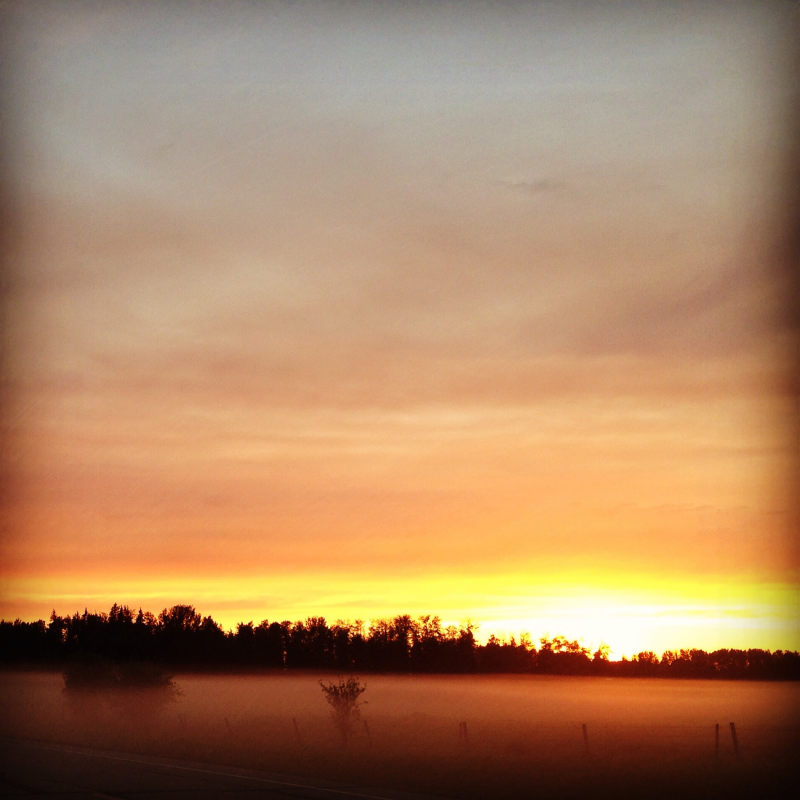