A needle in a haystack is defined as something that is very hard or impossible to find. As you may have read in my previous blog, this is exactly the type of mission I was on last week. And sure enough, finding the 29 birds with transmitters out of the near million birds I saw was very hard, if not impossible.

During the week I was on Padre Island, a strong frontal system brought winds from the southeast. This created unfavorable foraging conditions on the beaches but favorable conditions on the backside of the island, which is how I ended up trudging along mud flats instead of sunning on beaches. Additionally, previous radio telemetry studies in this area have highlighted a particular area on the backside of the island, the Laguna Madre, as an important foraging area for shorebirds during this time of the year. 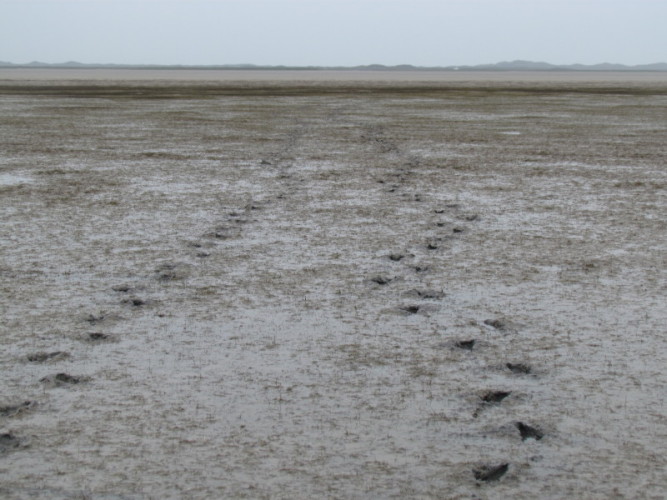 Our footprints in the exposed mudflats of the Laguna Madre, Padre Island National Seashore

Access to this area on the Laguna Madre is very difficult but finally we made it. As David Newstead, of Coastal Bend Bays & Estuaries, and I began our trek across the Laguna Madre, he marveled at how he had never seen so much of the Laguna exposed at this time of the year, creating lots of productive habitat for shorebirds. As the saying goes, if you build it they will come, and come they did.

As we looked out across the horizon, thick clouds of birds were visible all around us. Through the spotting scope we saw a landscape littered with hundreds of thousands of shorebirds. It was incredible! Like nothing I have ever seen. Even David, who has witnessed many shorebird migrations, was excited. We stood paralyzed with amazement not knowing where to begin or which direction to walk. All we could do was stare at the spectacle before us.

But reality sunk in and we realized we had a job to do: find six individual Red Knots in close to a million birds. You might ask how you even begin something like this. I asked myself the same thing!

We identified a flock of medium-sized shorebirds and off we went in that direction hiking across the mudflats, sometimes dry and sometimes in water up to our ankles. As soon as we came close to a group, we began to move very slowly almost as one person, hoping not to disturb the thousands of birds before us. Well, sometimes it worked and sometimes it did not. Although it was frustrating when a flock was spooked, it was quite amazing to see that many birds lift off, fly in our direction, and at the last second bank right or left only a few feet in front of us. 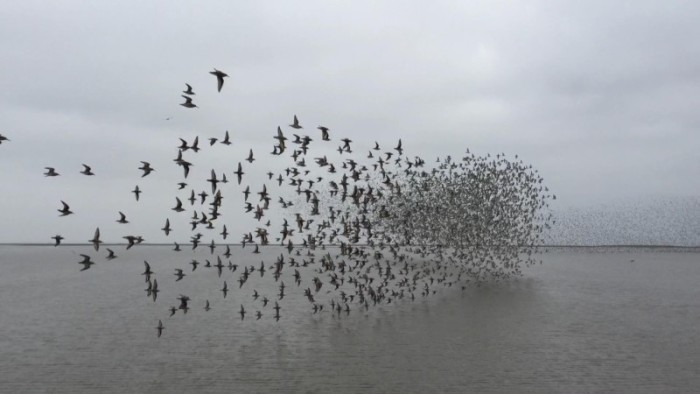 This continued for many hours. Hiking back and forth, traversing the Laguna Madre, trying to locate Red Knots, and scanning the groups with the spotting scope, hoping we could find at least one of our birds. Sad to say, we did not find any of the six Red Knots or any of the other birds with transmitters. We did however resight a few banded Piping Plovers and 13 banded Red Knots. Even more exciting, one of the Red Knots had a geolocator David put on in 2012. 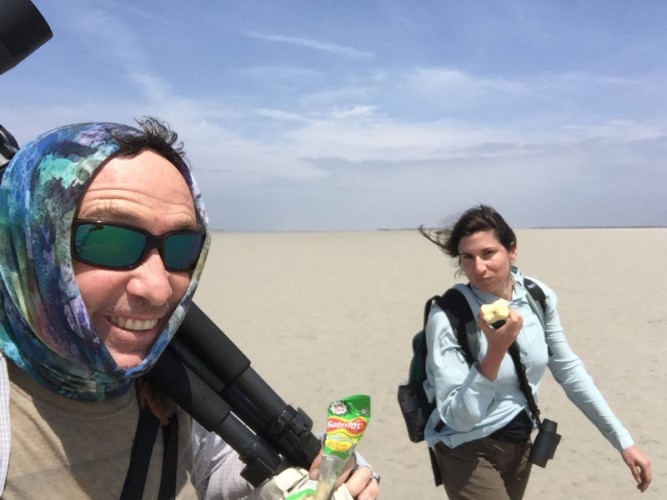 Snack break while hiking across the Laguna Madre, David Newstead and Amy Scarpignato

Although it was frustrating not to resight any of our birds, I will always remember that spectacular day on the Laguna Madre and the enormous number of shorebirds that rely on this area. It was truly amazing and something that I wish everyone could witness. Not just for the spectacle but if we can visualize and witness something this incredible then it is only natural that we will want to learn more about and protect these special and important places.

Check out a video put together by the Coastal Bend Bays & Estuaries Program of our day: