In Memoriam of Russ Greenberg 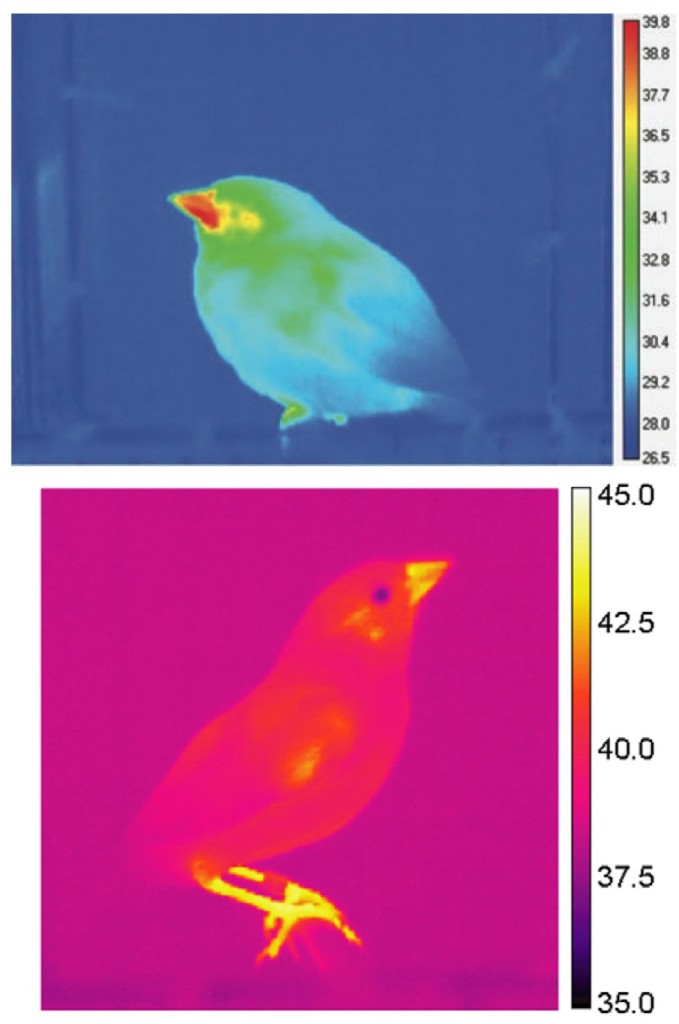 Thermal radiation of song sparrows in cold and hot weather. See “The Influence of the California Marine Layer on Bill Size in a Generalist Songbird” (Greenberg and Danner 2012) for details.

A pioneering ornithologist and director of the Smithsonian Institution’s Migratory Bird Center who was among the first to recognize a precipitous decline in neotropical bird populations and initiated a global “bird friendly coffee” movement to help address that decline, died on October 24. He was 60 and had pancreatic cancer.

Eschewing the charismatic species that attract so many birders, Greenberg dedicated most of his career to studies of nature’s more subtly colored fliers in lowland tropical forests and wetlands including wintering warblers, vireos, antwrens, swamp sparrows and rusty blackbirds. From observations of these often unappreciated species he derived a number of groundbreaking insights into avian behavior, evolution, and ecology. His most recent work brought ecological and evolutionary evidence to bear on an emerging and surprising recognition that, beyond their obvious utility for nabbing insects and hulling seeds, bird beaks serve an important role in the regulation of avian body temperature.

Much of Greenberg’s early research focused on how tropical bird populations manage to absorb the annual influxes of migratory birds from the north and how resident birds co-exist with these seasonally uninvited guests even as local food resources tend to be at their nadir during those dry, northern-hemisphere winter months. That work gradually expanded to address the more general question of how birds adapt to changing conditions and, ultimately, to revelations about the unique personalities exhibited by various species and the importance of those temperaments in predicting how birds will respond to new situations.

Greenberg was among the earliest researchers to document the impacts of neotropical habitat disruption on local and migratory birds, co-authoring a seminal 1989 research report on that topic in the Proceedings of the National Academy of Sciences. Convinced there were economically feasible solutions to this emerging threat, he studied novel approaches to growing coffee, cacao, and other crops that could minimize negative impacts on tropical forest ecosystems. Today Greenberg is widely recognized as having invented the approach of marketing “shade-grown” coffee as a bird-friendly product, and for developing the rigorous science-based criteria now used in Smithsonian Bird Friendly coffee and a variety of other coffee certification programs around the world. In recognition of his innovative research and his successful bridging of the conservation, research, and business communities, he was earlier this year awarded the prestigious Elliott Coues Award of the American Ornithologists Union.

Most recently, Greenberg had begun to pursue a new line of research, asking whether the sizes and shapes of various bird bills might be explained not just by the species’ foraging needs but also by birds’ need to regulate heat loss. His integrative exploration of the bird bill as a thermal radiator added a new dimension to an avian feature better known for its seminal role in Charles Darwin’s theory of evolution, and he went right to the source—initiating studies last spring on three species of Galapagos finches.

Born in Washington, DC, and moving with his parents to California at an early age, Russ Greenberg displayed a precocious affinity to birds. He started his “life list” of bird sightings at age eight by excitedly identifying a (dull brown) California Towhee, and maintained a passion for ornithology throughout his youth, hitchhiking around the Golden State in search of birds and earning a Bachelor’s degree and PhD in zoology from the University of California at Berkeley. In his years of communing with fellow scientists at professional meetings he became known as much for his exceedingly dry humor and flawless deadpan as for his commitment to thought-provoking and interdisciplinary research; colleagues still talk about the color slide he liked to use in his talks—supposedly an aerial view of lowland tropical forest, but actually a photo of the broccoli display he took at the Berkeley Bowl supermarket.

In 1991—in response to growing concerns about the plight of migratory birds that Greenberg and his colleagues had raised in their 1989 paper—the US Congress appropriated funds to create the Smithsonian Migratory Bird Center. Greenberg was named its first director, a position he held until his death. Among the many educational initiatives he launched during his tenure was Migratory Bird Day, a festival to celebrate the arrival of migratory songbirds back to their northern breeding areas, now celebrated at 700 venues throughout the Western hemisphere. A passionate advocate for science education, Greenberg served as a mentor or advisor to more than 70 postdoctoral scholars, graduate students, and research interns.

He was also a prolific writer and highly regarded editor, contributing to professional and lay-language ornithology and conservation publications. He authored more than 150 peer-reviewed research papers, served as editor of the Smithsonian Institution’s Field Guide to the Birds and on the editorial boards of several professional publications, and was a contributor to several books and edited volumes on various aspects of ornithology and tropical forest conservation. In addition to his work for the Smithsonian Institution and its National Zoological Park in Washington, DC (where in 1996 he co-organized the first international Sustainable Coffee Congress), Greenberg served on the advisory boards of a number of conservation organizations, including the National Fish and Wildlife Foundation, Rain Forest Network, and World Wildlife Fund.

In his spare time he was a dedicated little league coach throughout his son Jeremy’s elementary and middle-school years. More recently he could be found roller blading, figure skating (taking perverse ornithological pride in his perfection of a move known as “shoot the duck”), or practicing aerial arts on the trapeze with his teenage daughter, Natalie.

Russ was passionate about graduate and post graduate training. To honor him and to ensure his important work continues, we are establishing the “Russ Greenberg Fellowship Fund” at the Smithsonian Migratory Bird Center. If you wish to contribute, please contact Lesli Creedon at 202-633-3022 / creedonl@si.edu

He is survived by his wife and early scientific collaborator, Judy Gradwohl; daughter Natalie, and son Jeremy.

An obituary also appeared in the Washington Post on November 6.