After a full day on the beach, faces burned by sun and wind, we were winding down outside on the hotel patio when Lynyrd Skynyrd’s Freebird started playing on the Tiki Bar stereo.

If I leave here tomorrow,
Would you still remember me?
For I must be traveling on now
‘Cause there’s too many places I’ve got to see.

I’m fairly confident Ronnie Van Zant wasn’t thinking about the migratory connectivity of Black-bellied plovers when he wrote this rock classic. But the song rang true to us as we sat being chilled by the evening breeze and reminiscing about the day. Although we blanked on curlews and godwits, we did successfully capture three plovers and deployed a new technology that will allow us to not only remember them when they start traveling on, but to track their specific moves.

The new satellite transmitters, at 3.4 grams, are the lightest available and will allow us to determine the migratory connectivity of a whole new suite of species, including several shorebirds never tracked before throughout their annual cycle.

Shorebirds in North America have collectively declined by over 50% since 1968. Lots of theories exist but the truth of it is that we don’t know why these declines are occurring, and this is in large part because we don’t know where and why birds are dying.

Take for example, the Black-bellied plovers that we trapped and tagged today. At 30 preset times the device wakes up, looks for a satellite constellation, stores a GPS fix with the geolocation in time of where the bird was—to a 10 meter accuracy—and then goes back to sleep.

The devices are programmed to wake up again at various times in the coming months to transmit those 30 points to an Argos satellite which then transmits it back to us. Transmitting big batches of data rather than each point when it’s collected saves battery life, which means we can use smaller batteries that weigh much less. Although these devices probably won’t allow us to locate individual birds when they die or even track birds in real time, these new transmitters will tell us new stories about smaller and smaller species.

Determining exactly where Black-bellied plovers from this part of Texas migrate in fall and spring, as well as where they breed, down to 10 meters, is a remarkable advance that will allow us to start studying how land-use, climate and other factors may have changed in these areas and is impacting birds and other wildlife.

Each day we move down the endless beach catching plover after plover in an attempt to uncover unknown migrations and other mysteries about the biology of these remarkable species.

In almost ritualistic fashion, we kneel down facing the crashing waves of the Gulf of Mexico, place the dangling feet of the birds on the wet sand, and pull our hands apart toward the sky allowing these plovers to fly and leave here tomorrow or at least some point in the future for points north. 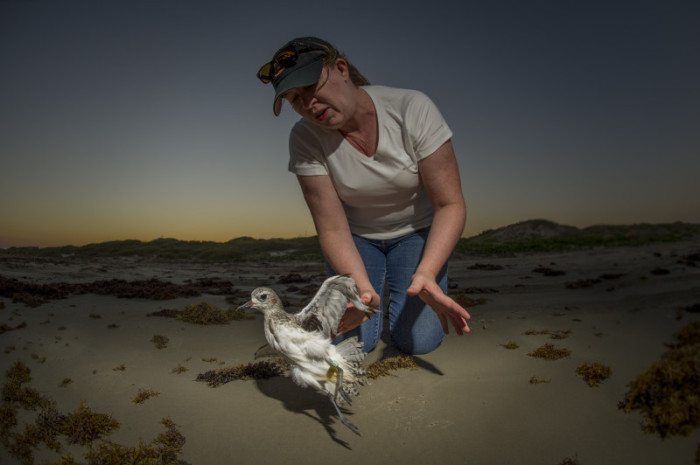