Long-billed Curlews have almost vanished from the southeastern United States. One male curlew, tracked from Georgia this spring, led us to his presumed breeding grounds in Saskatchewan and we are on a mission to tag his mate. 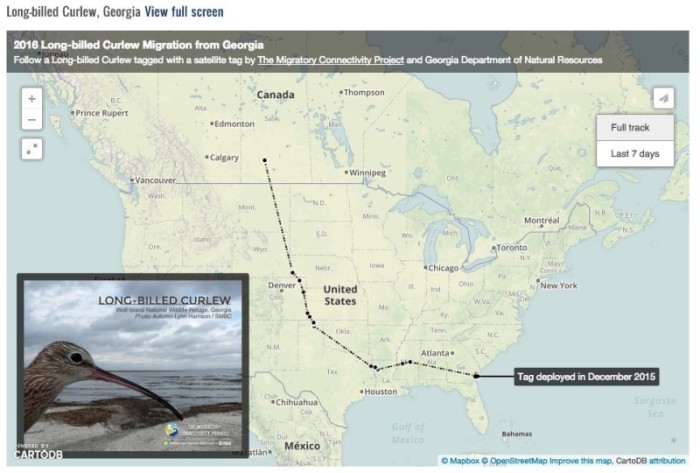 In December 2015, Autumn-Lynn Harrison (MCP) and David Newstead (Coastal Bend Bays And Estuaries) traveled to South Carolina and Georgia to find curlews in this disappearing population and attach tracking devices. We hoped this would help us identify the breeding locations of southeastern curlews and the unknown migrations they take to travel there.

From this expedition, one male curlew was successfully fitted with a 9.5g solar-powered Argos satellite transmitter. This allowed us to track the individual in almost real time. He left his Georgia wintering grounds in April, 2016 and took an unusual migration! He flew directly west to Oklahoma, and then straight north to Riverhurst, Saskatchewan.

Eyes on the breeding grounds

Local Saskatchewan birders, Lori, and Joel and Annie, saw the curlew map on the MCP Facebook page and decided to try to locate the bird in their local birding haunts. Upon finding the bird, they also discovered a female nearby, and a nest! They contacted us here in Washington DC, sent us photographs, and told us what they found.

When we heard this, we thought, why not try to capture the mate of our Georgia bird and see if she also overwinters in the southeastern United States. We rapidly mobilized a team: local volunteers Annie McLeod, Joel Cherry, Lori Wilson, and Ryan Fisher, Jay Carlisle of Intermountain Bird Observatory—an expert at capturing curlews on their breeding grounds, and me. 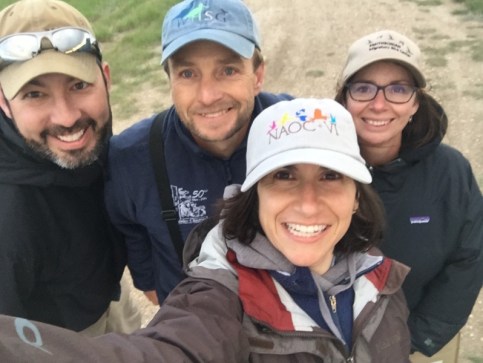 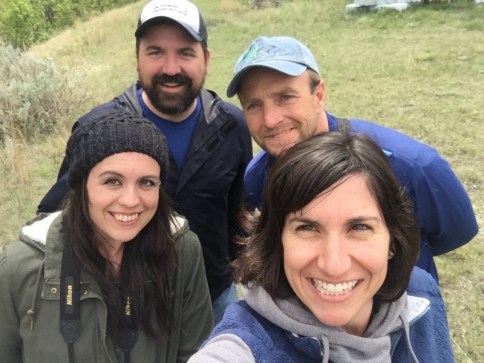 We arrived to the spot where the male curlew from Georgia was seen, and we observed a female. This must be his mate! And the tagged male curlew must be sitting on the nest incubating the eggs! Male and female curlews alternate incubating the eggs, one from dawn to dusk and the other from dusk till dawn. It is during the “switch” times that we are able to identify the nest location.

After watching the female for some time, a second curlew flew into the area. It was our Georgia bird, prominently displaying his colored leg bands and satellite transmitter! Uh-oh. This was both puzzling and a little worrisome at the same time because we figured he was incubating the eggs while the female was off the nest. Did our Georgia bird really have a nest? Did the nest fail? To figure out what was happening, all we could do was wait and observe. 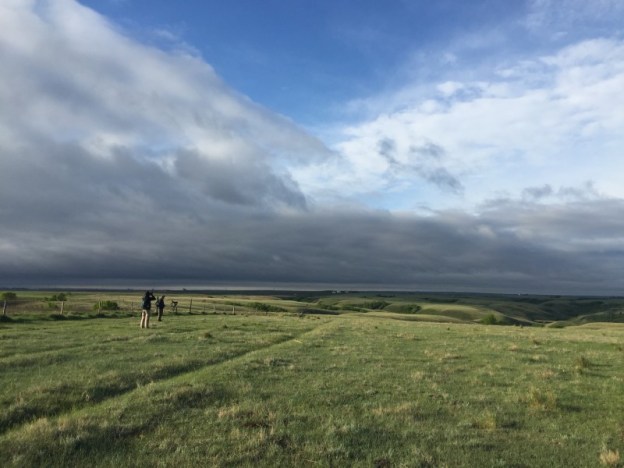 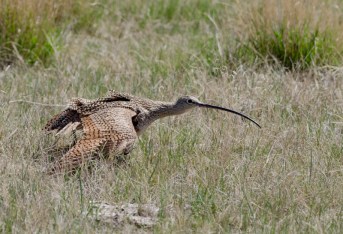 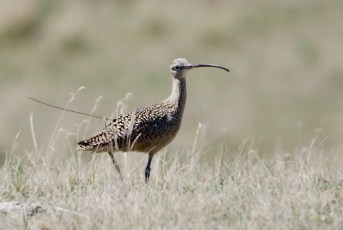 If this is George, then who is on the nest? Male Curlew tagged in Georgia, pictured in Saskatchewan. Photo: Annie McLeod

After about 30 minutes, we finally saw the incubation switch and found the nest. The catch… the male of the pair wasn’t our Georgia bird after all. There was another male, and he was the breeder!

To recap: in the immediate vicinity of the curlew nest, there was a mated pair and our tagged bird from Georgia…a third wheel bachelor?

We reconvened and decided it was definitely worth trying to capture and track the mated pair. Maybe this is a tiny little pocket of birds that all go to the southeastern United States to overwinter. Or, maybe the bird from Georgia really is an original. 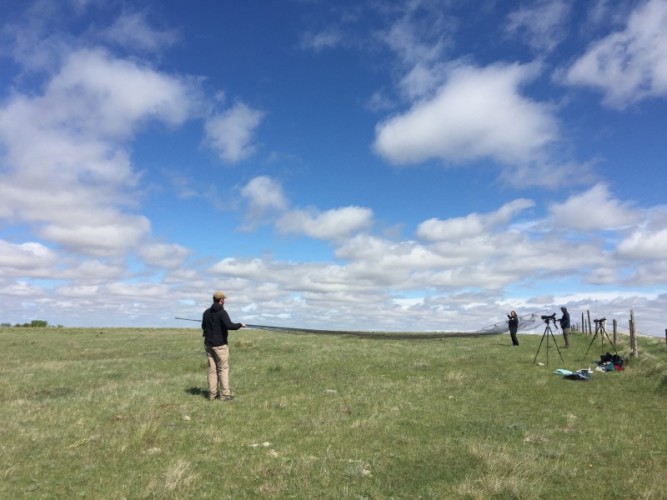 To capture birds on the nest, two people carry a 12 m net parallel to the ground and one person directs them to the nest from afar (via walkie talke). A curlew on the ground is extremely camouflaged with the ground, and therefore extremely difficult to see till close to the nest. We attempted to capture the female, currently sitting on the nest. We walked toward the nest. When we were within a few meters, the female flushed from the nest. Our first attempt was unsuccessful but we still knew the nest location and could try again to capture the male of this pair.

After waiting for another incubation switch when the male would once again sit on the nest, our attempt to capture the male was successful! As we approached, he remained on the nest and we were able to place the net on top of him. We successfully attached the satellite transmitter and then released the bird.

Working before the storms come 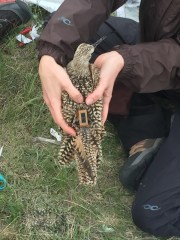 Tag fitted on male breeding curlew using a harness of ribbon around the legs. 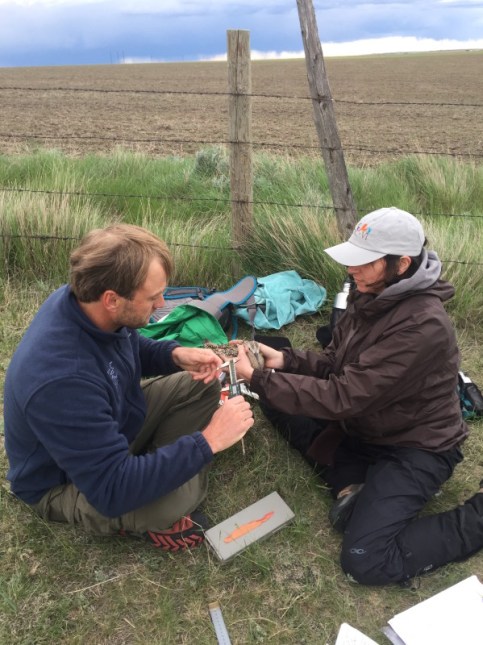 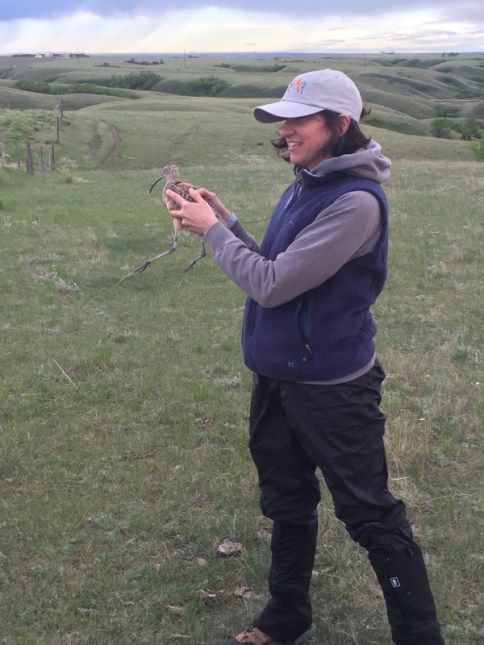 Thanks to a lot of help in Saskatchewan, including kind permission and access from the landowner on whose land the nest was located, we hope to unravel another piece of our curlew puzzle. A huge thank you also to Annie, Joel, Lori, and Ryan!

The interesting part of this story is our Georgia bird. Why was he hanging around this pair? And why was the pair tolerant of another male hanging around them and their nest? We still do not know the answers to these questions but we are hoping to gain more information as the tagged birds begin to migrate from their Saskatchewan breeding grounds to their wintering grounds.

By Amy Scarpignato and Jay Carlisle