With just two weeks notice, I was on a plane to Mexico to visit some friends who were enjoying their vacation down south. Sounds like a typical start to Spring Break for many students on college campuses across the U.S., only my destination was not Cancun, and my vacationing friends have feathers. This is spring break in Mexico, Mountain Plover style. 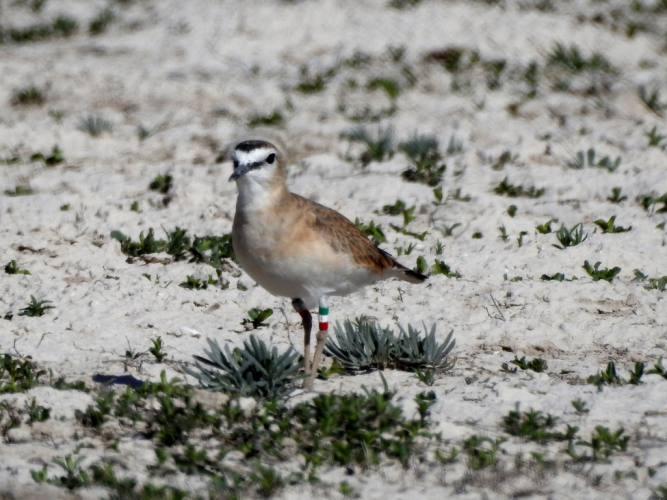 Colored leg bands unique identify this Mountain Plover as an individual banded in South Park Colorado in 2016. Coincidentally, this plover sports the color combination of the Mexican flag and was the first U.S. banded plover re-sighted in Mexico last year in San Luis Potosi, south of La Soledad. Near the base of the tail the small black antenna of a GPS datalogger can be seen.
Credit: Alli Pierce

These questions are the focus of our Mountain Plover research as a part of The Migratory Connectivity Project. They are important to answer if we wish to effectively conserve a declining species that does not see borders between countries.

When our colleagues Irene Ruvalcaba Ortega and Julio Merayo (Master’s student) from Universidad Autónoma de Nuevo León (UANL) called to tell us about the 200 PLOVERS (!) they found during their ongoing plover survey project, I booked a flight immediately. The goal: trap and tag 3 birds with GPS/Satellite tags before most leave for spring migration. These tags collect 30 GPS locations and then transmit them via satellite for download, allowing us to find if/where these plovers migrate to breed without needing to recapture the bird. 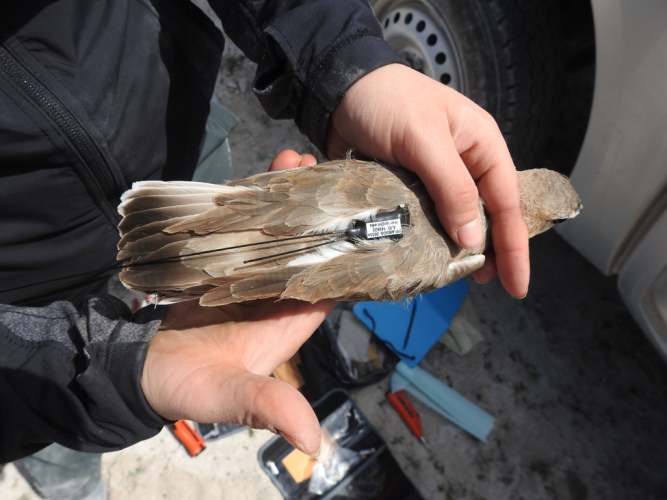 Mountain Plover with GPS/Satellite tag securely in place. Tag placement is similar to a small hip pack with stretchy elastic cord looped around the legs. The small antenna is for the GPS chip and the longer antenna communicates with an Argos satellite to upload the 30 GPS locations at the end of the recording schedule.
Credit: Alli Pierce

From Monterrey, we headed south across the Sierra Madre Oriental mountain range to a large flat plain called “Llano de la Soledad”, the plain of loneliness. These plains are anything but lonely. Home to the largest colony of Mexican prairie dogs, this area is important for many wintering shorebirds such as Longbilled Curlew, Upland Sandpiper, and of course Mountain Plover. 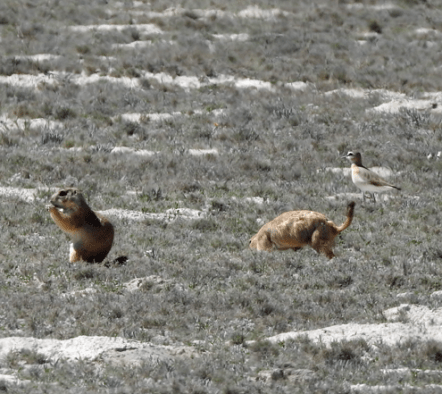 Mexican prairie dogs (Cynomys mexicanus) foraging in the company of a Mountain Plover. This species is an endangered relative of the black-tailed prairie dog (Cynomys ludovicianus) which is associated with Mountain Plover in the United States. Credit: Alli Pierce

Trapping non-breeding plover is no small feat, as the birds are not easily lured and are wary of approaching traps. Luckily, we were able to find a foraging area on the first day where multiple flocks of 10-50 plovers visited daily. We even spotted two banded plovers, one banded by Julio during breeding season last summer in the same area and one I banded 2 years ago in South Park, Colorado. These sightings suggest that the flocks we observed were mixed with migrants and residents. I was very excited to find the plover from Colorado, especially because it was the same one spotted in Mexico at a site further south last year — the first Mountain Plover banded in the U.S. to ever be re-sighted in Mexico. Last summer, I recaptured this bird in Colorado and tagged it with a GPS data logger that was still in place and waiting to be retrieved this summer. 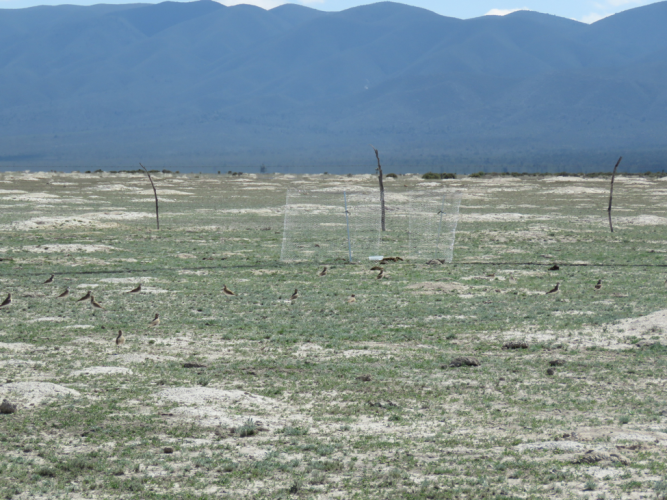 Mountain Plovers closing in on the funnel trap surrounded by low lying mistnets. No one was interested in the trap full of beetles but one eventually tried to walk through the net and was successfully captured. Credit: Julio Merayo

Using a combination of low lying mist-nets, spotlighting at night with a hand net, a lot of patience, and even more luck; we were able to trap, band, and tag 3 plovers — all on the last 3 days of the week-long trip. Tags were programmed to record locations on three different schedules, once a day, every other day, and once a week. This GPS/satellite tag technology has not been used with this species before and these schedules will help us learn about the efficacy of this technology over varied deployment periods. If successful, we will also gain valuable information about when/where these three plovers migrate to breed and expand our migration research south of the border and other areas where it can be difficult re-locate birds and retrieve standard GPS dataloggers. With a binational collaborative effort between scientists at CU Denver, UANL, and the SMBC; we hope to continue to unravel the mysteries of Mountain Plover migration. Although I look forward to an opportunity to visit my feathered friends again soon, the people I met on this trip are the friends I look forward to visiting and working with again the most. Alli Pierce getting ready to release the tagged bird back into the wild.Credit: Julio Merayo Julio with a Mountain Plover in hand, making sure the plover was not injured by the net and healthy enough to band/tag. Credit: Alli Pierce

About the Author
Alli is a Ph.D. student in Integrative and Systems Biology at University of Colorado Denver. She is investigating questions about migratory ecology and population dynamics of Mountain Plovers at the continental scale. As part of this research, she is tracking individual plover migration movements using GPS data loggers in collaboration with the Migratory Connectivity Project and the Smithsonian Migratory Bird Center.
Social Share