The scale of Denali National Park makes grizzly bears seem like ants on the landscape. We’ve seen five grizzlies so far. They are a striking blonde phase known as the Toklat Grizzly. But if grizzlies seem as tiny as ants, you can imagine that finding birds in the park is like spotting an ant’s eye. This is the grandest landscape I’ve ever seen. 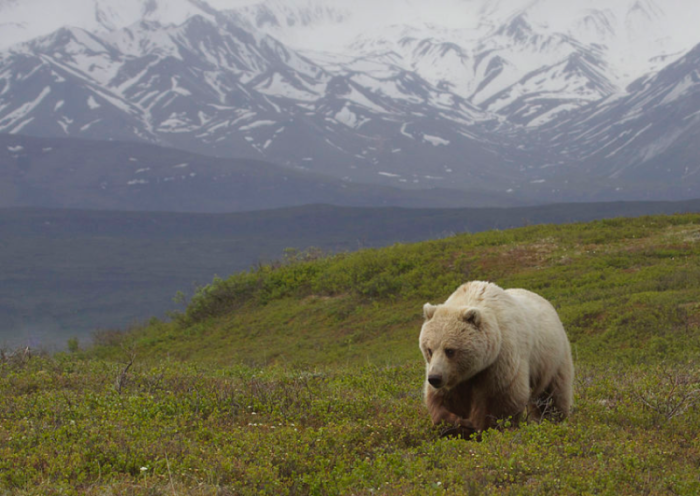 We are here to study the Long-tailed Jaeger, a seabird that spends most of its life in the open Pacific Ocean, but that breeds in Denali National Park in high elevation habitat called alpine tundra. Long-tailed Jaegers also breed in coastal tundra habitat on the Seward Peninsula and the North Slope of Alaska. Last year, I tracked the migration of one Long-tailed Jaeger from a breeding population near Nome, Alaska, where the tundra is at sea level. This was the first recorded migration path of the species in the Pacific Ocean. 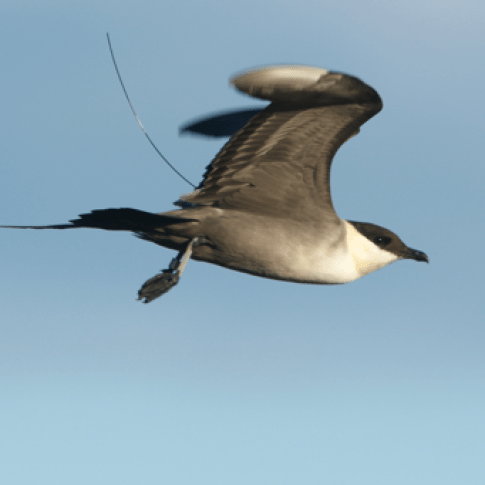 Following our work with the species last year, we began a collaboration with Denali National Park ecologists Laura Phillips and Emily Williams to use satellite tags to reveal the migrations of Long-tailed Jaegers breeding in the park. Our collaboration contributes to the park’s Critical Connections Program, a multi-year project to track and study migratory birds that spend their summers in Denali and their winters far south. The program was designed to expand the National Park Service’s knowledge about the year-round needs of migratory wildlife of Alaska’s National Parklands, and to provide park managers with essential information for implementing management and conservation strategies for these migratory species.

The Denali population of Long-tailed Jaegers is special in Alaska because they connect the mountains of Alaska’s interior to the sea. The alpine tundra that jaegers use for breeding in Denali is changing. A repeat photography project at the Park has documented differences in Alpine habitat from the 1930s to early 2000s, showing shrubs and willows moving up slopes and replacing tundra. There is some evidence that locations where jaegers used to breed no longer support the species. It is an important time to document the critical connections of this alpine-breeding seabird’s migrations to and from Denali National Park. 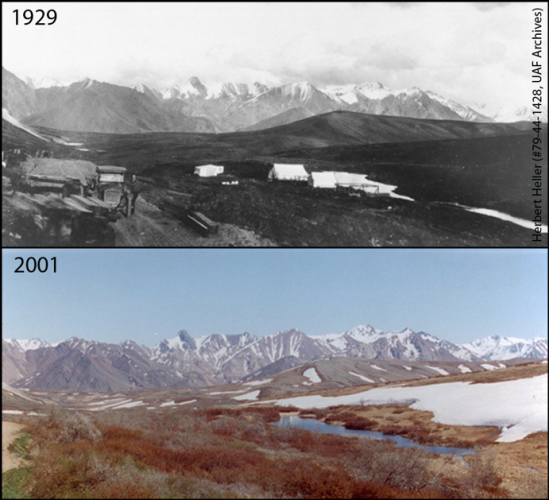 Changing shrublines from Denali’s Repeat Photography Project. In 1929 the Alaska Road Commission worked near the summit of Sable Pass building the Denali Park Road. Pictured here is one of their camps. By 2001 you can see that this alpine area is now supporting more woody vegetation, with 0.5-1 meter tall willows present throughout the area that the camp existed. Photo Credits: Herbert Heller (#79-44-1428, UAF Archives) (1929), Layne Adams (2001).

To find the birds, we crossed a river (the eastern fork of the Toklat River near Polychrome Pass) and hiked up to their tundra habitat at 4225 feet. Hiking above the river up to alpine tundra. Photos by Mary Lewandowski Crossing the East Fork of the Toklat River. Photos by Mary Lewandowski

After a 3-hour hike toting our capture gear we were rewarded with the aerial acrobatics of three individuals. These birds were made for the high winds (and a bit of rain) we experienced on the beautiful alpine plateaus, conditions they are likely to encounter frequently over the ocean.

Unfortunately, after observing the birds for some time, it was clear they did not have a nest and seemed to be foraging and enjoying the winds. Since captures occur at the nest, down the slope we went and off to another location in the Park tomorrow. 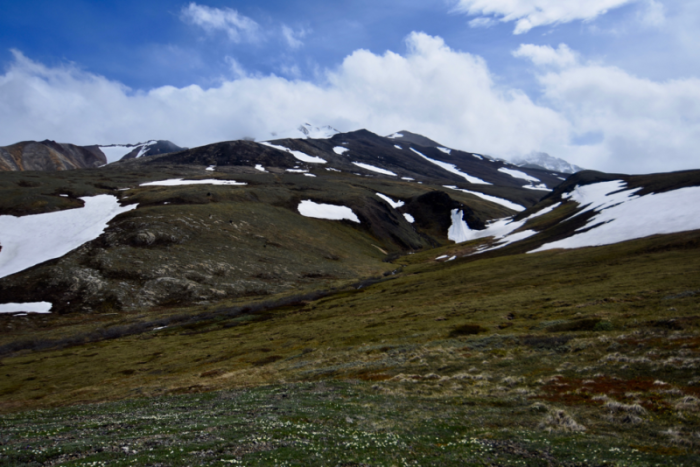 Alpine tundra above the East Fork of the Toklat River where we saw three Long-tailed Jaegers in Denali National Park. Photo by Mary Lewandowski