In the time of the pandemic, when most field biologists are working from their desks instead of out studying birds, the Migratory Connectivity Project is using this time to make progress on the Atlas of Migratory Connectivity. The Atlas will be a compilation of all migratory connectivity data for the Birds of North America, with maps for each species and an emphasis on why these data are so important.

I had the unfortunate timing to start working for MCP right at the start of the pandemic. My role includes drafting text for the Atlas, communicating with contributors, and managing the incredible amount of tracking data that exists for the birds of North America. Luckily, the Atlas is reminding me of all the species of birds that have continued their migrations as usual over the last several months.

For example, I was inspired by while reviewing content for the King Eider. Its spring migration spectacle includes tens of thousands of individuals passing overhead for hours on end. It breeds in remote regions at higher latitudes than almost any other species and winters at sea, making it extremely hard to study. This is where remote tracking technology, like the tags used by MCP, have changed our understanding of the species. Researchers have been able to track the migration of King Eiders by using satellite transmitters. What was once a poorly studied, remote species, now has a plethora of tracking information. 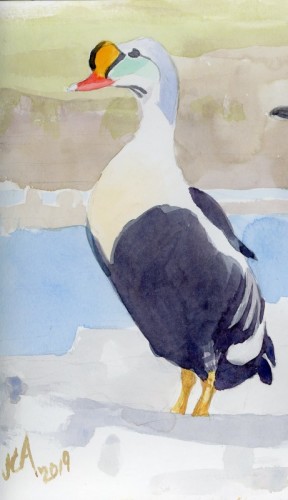 King Eider by John Anderton. Watercolor paintings like these will be featured for each species in the Atlas of Migratory Connectivity.

MCP tracks similarly hard-to-study species with our field projects focused on discovering unknown migrations. Some of the species we study, like Common Nighthawks, are also species of conservation concern. MCP researchers and collaborators recently tracked Common Nighthawks for the first time throughout their full annual cycle. They migrated from their breeding ranges in the boreal forest of Canada, over the Gulf of Mexico, to winter in tropical regions of Brazil. They then returned the following year to their original breeding ranges. 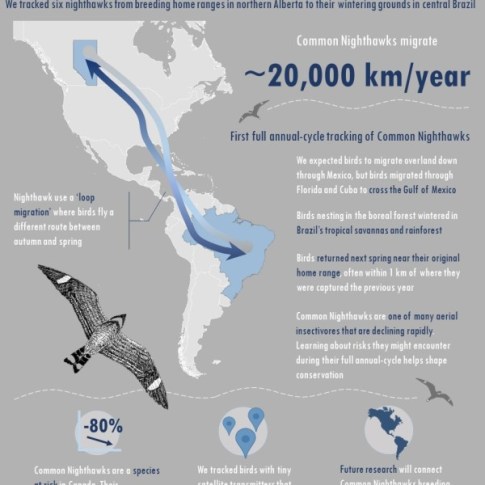 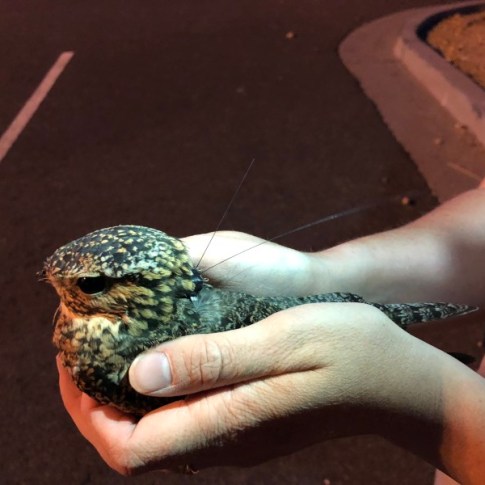 Though most of us can’t go far beyond our homes right now, birds all over the world have continued their amazing migrations, both near and far. Until we can resume field work in places like the Arctic and the boreal forest, I’ll be enjoying watching the migrants in my backyard every day (one of the seven simple actions to help birds), and reading about migrants in far away places.

About the Author
Allison is a Research Assistant specializing in the Atlas of Migratory Connectivity and general Migratory Connectivity Project support. She recently completed her master's in Wildlife at Humboldt State University where she studied barn owl habitat selection in a vineyard agroecosystem.
Social Share