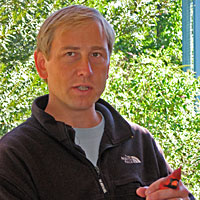 Pete Marra is among four Smithsonian scientists to be awarded the distinction of Fellow by the American Association for the Advancement of Science. They have been elevated to this rank because of their efforts toward advancing science applications that are deemed scientifically or socially distinguished. The names of all 388 AAAS fellows for 2013 were announced in the Nov. 29 issue of Science.